Do we have to pre-register?
Pre- Registration is preferred. We will accept registration at the gate the morning of the event if space is available.  We will not be accepting credit card payment at the entry gate.  Space is limited!

What does the registration fee cover?
Your entry into the car show and 2 general admission entries to the Festival.

Can I leave the event early?
In keeping with the integrity of the event, we would prefer that all cars remain on site until after the 3pm awards show.  However, should you need to leave early, arrangements can be made to assist you in leaving.  Please be aware that the event area will have heavy pedestrian traffic and you will need assistance to leave the event to ensure the safety of the attendees.

If there is a most highly-celebrated BBQing festival in the US (and probably in the world), the Lexington Barbecue Festival could be the rightful owner of that title.  It’s an annual community festival showcasing the best of the best traditional barbecues and was first held on October 27, 1984, in Lexington, North Carolina.

Tagged as the world’s Barbecue Capital, Lexington and its famous barbecue had its beginnings in a make shift tent that housed Sid Weaver’s barbecue.  The year was 1919.  Soon after, another fellow Jesse Swicegood opened a similar barbecue stand in the area.  Business was brisk so more entrepreneurs had followed suit.  While modern-day chefs in the area may have tweaked portions of the barbecue recipe, most of the classic recipe, including the slow-cooking method and customary baste have been retained.

Why is their BBQ so extra special?  Lexington chefs use pork shoulder, their best cut for barbecues.  The pork is slow-cooked over hot coals of hickory wood. Chefs baste it with a special dip made out of water, salt, pepper, and vinegar.  The meat is done when the flesh is almost falling apart. Chefs serve it chopped or sliced (depending on your preference), with an ample serving of delicious dipping sauce.

Now on its 34th year of celebration, Lexington has once again prepared a string of events this month of October, which happens to be barbecue month of the Davidson county seat.  Events from cycling to fishing and to golf tournaments are scheduled on this month and will finish off with the barbecue festival itself which is due on Saturday, 28 October 2017.   The festival organizers hope to break previous years’ attendance records and encourage every backyard BBQing fan to proceed to Uptown Lexington.

For sponsoring our last bbq fundraiser.

Having guests over for a whole day of backyard BBQing?  Here are the basics you should not miss when planning for one. 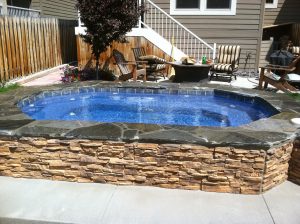 Come up with a checklist

If you aren’t fond of making lists, you should start doing one now for your barbecue party.  If you want to have fun and not worry about going short on BBQ sauce or drinks, get organized.  If you have every detail needed in your checklist, you will have more time for your guests.  It is your party and you should be playing host and not a problem solver.

Nothing beats having a good ambiance.  Try hanging some festive lights around the backyard.  As nighttime unfolds, the twinkling soft lights would give your area a soft relaxing glow.  A bouquet of fresh flowers on the center of each table will create a lovely sight.  But it doesn’t have to look like you’re hosting a BBQ festival.  Just keep it simple and low key.

Stock up on chillers

Light beer shouldn’t be absent on your barbecue night.  But you have to keep it simple.  Stocking up on two varieties of beer or ale is good enough.  But don’t scrimp on the ice.  It’s the most important item to keep your beer chilled.  Have enough coolers on hand.

Barbecuing isn’t all about food and drinks.  Don’t forget to buy some bug repellants for your guests.  While many guests are thoughtful enough to bring their own, it is still considerate of you as a host to have one for those who may have forgotten.

Holding a backyard BBQ whether at noon or night entails planning. We do this with out company towing Spokane once a month! Make sure your guests are comfortable and at ease while outdoors.  Plan ahead and be the perfect host.

Grilling or BBQing for sporting events/tailgating can be a fun activity whether you are with family or friends.  But there’s twice the fun if you practice safety.  Here are some tips to remember when out grilling.

Always stay by the BBQ grill

It is a big no to leave the grill unattended even for a few minutes.  If you really have to leave to attend to something important, ask another responsible adult to sub for you in the meantime.  You may be tempted to check out other grillers to see how they’re doing but it is not the right time to socialize.  Do so if you’re done and have put off everything.  When you are tailgate grilling the more you should practice safety precautions.  After all, you are in a stadium parking lot.  With a bigger crowd in your midst, you are expected to practice twice the precaution as you would in an ordinary backyard BBQing activity.

Never let kids get too close to the grill

Sometimes younger kids out of curiosity might go near the grill.  Do not let this happen and always keep an eye on them.  Older kids, on the other hand, might accidentally hit it when playing ball games so watch out for these possible mishaps.

Before you light your BBQ grill, make sure you check the hoses for any possible damage or leaks.  If done checking, open the lid first then turn the gas on.  Always follow the instructions indicated on the grill equipment.  Sometimes, grills would not light up after a few tries.  What you could do is try to turn off both the burner and the gas.  After a few minutes (up to 10 minutes is advised), make another attempt at lighting it.

Thank you To Wenatchee Plumbing for these outdoor bbq tips.